I really try to post my week in review on Sunday but it didn't happen yesterday... so... here you go. 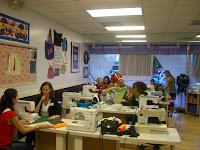 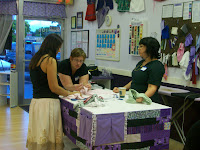 Another fun week was had at the girl cave with the Hollywood Craft Mafia using the sewing studio for one of their events. These girls filled my studio. I've never seen so many people in it at one time. They made tote bags out of t-shirts and some really cute bags were made. You can view more pictures of the event by clicking here.

I also had a couple machines die on my last week. One I kind of dropped on the floor (oops) It was an Singer Inspiration which is a really bad design and machine. I only paid less then $100 for it and it really never did work that well. Another machine had sparks flying out of where you plug in the power cord. It was a Simplicity Quilters machine that I've had since I've opened my studio and has seen a lot of use. Many things have broken on this the past few years so time to trash this machine too which just leaves me with 5 working machines and I need 6. If anyone happens not to bring in their machines to class, I could be in trouble and cancel one student because I'm a machine short. SO, I had to go but a new machine. I did a search online. I was looking for a brothers machine because they have so many different kinds of buttonholes and they are easy to make buttonholes on their machines. The place that sells them for the least is Walmart. Now, I am not a Walmart shopper but I took myself there anyway because I can save up to $30. I wanted this (CS-6000i) machine but ended up getting this (Brother 50-Stitch Limited Edition Project Runway Sewing Machine, CE5500PRW) one because they were out of stock on the one I wanted and the one I bought was only $135. Perfect for the sewing studio. I used it yesterday to do a little sewing for myself and I love it for the price! It's bigger than most brothers machines this price. The only thing I don't like about it is the needle always stops in the down position every time the machine stops which means you have to turn the hand wheel to lift the needle each time. It will help with the students though because it allows them to stop and not loose their stitch. 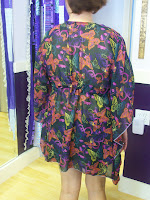 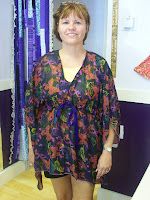 Nancy finished her top. This was her first garment and she didn't pick the easiest fabric to work with. She made McCall's 5855. It's a really cute blouse and I think she will enjoy sewing it more if she uses a different fabric instead of the very lightweight sheer fabric she did use. She did not want to hem all the way around the big square (because that's all this blouse really is with a whole in the middle for the neckline) so we ended up passing it through the serger to finish the edge. I love the colors of the fabric and it looks really good on her! After she finished the top she went right back to making her easy kitchen appliance covers.


Cristina came to class last year to make a dress to get married in. She never finished the dress, went out and bought a dress to get married in. She came back to class this week to make baby clothes because she's pregnant with a girl. Baby girl clothes are the most fun to make IMO. She made a little dress in a few hours. When she finished I had all intentions in picking up the camera to take a picture but ya think I took one???? NO! I hate when I do that. She still has a little more to do in the dress but I have a feeling she's finishing it at home. She will be back to class on Tuesday so we'll find out...
I'm really proud of my new student Mary O. She's making a very professional dress/jacket. She had no problems learning the machine, cutting her pattern and sewing. Usually the first thing you have to do in any garment are darts. It was a breeze for her to do the darts, and install the facing that was finishing off the neckline and armholes. It is coming out so pretty! We left off with the invisible zipper. Then the side seams/hem and the dress will be finished. YES, I will take pictures!
Mom and daughter, Karen and Kimi came back to class to finish their tops except we didn't finish but I think they know what to do to complete them at home. They both just had to hem the bottom of the tops. I think Karen had a couple more steps but will have no problem doing it on her own. My goal is to get my students sewing comfortably at home and when they have problems with a project bring it to class and I'll get them over their hump. 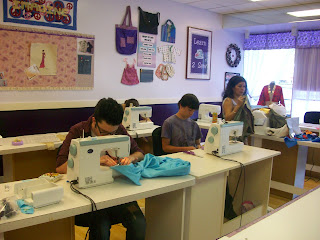 Saturday, like always, were full classes. This is a few of the people in the 1-3 class. James is on the left sewing his blue shirt. Next to him is Corey. Iris is walking by Corey going over to the Iron and Sofia's behind Corey. We had a few other students who were in class but the pictures came out too dark to put on here (sorry Estee and Megan!)


Estee made her bodice to her Snow White costume but she had a little problem with the construction working with the liner fabric. She put them together and acted like they were one layer of fabric. Anytime you work with a liner you always make one set of the fabric and one set of the liner then sew the two together either at the neckline, armholes or both. 2 other people were doing the same technique in class so she finally understood the process before she left class.
And Megan came back to class with her mom Sonia. The finished the pants they started last week at home and got half way through the top to go with the pants. They both work so well with one another. Sonia has so much patience and really understands the process. She only needs help seeing a few things but once I show it clicks with her. 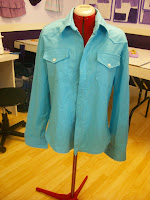 Now, lets talk about James. He's 16 years old and wants to be a designer. He's well on his way to doing it. He has great style. He did finish his pants he started last week except they were a little funny looking with the pockets sitting very low (we placed them where the pattern told us) so we didn't take a picture of them even though I did have my camera in hand. James started this shirt at home just needing help with the cuffs, collar and front bands for the buttonholes. Really, all three are done with the same technique so by the time he did the last step he know what was being taught to him too. Really, he did such beautiful straight stitches on the pockets and his edge stitching. WOW, I was very impressed he made most of this at home last week. Much better than his first projects, the pants. 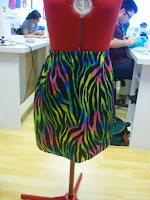 And Corey finished his skirt. This was very hard fabric for Corey to use but he worked through it pulling out stitches a few time. He learned how to install elastic by folding the fabric to make a casing. He also learned not to twist the elastic when you put it together. He also liked the idea of passing the raw edge through the serger to make the hem. 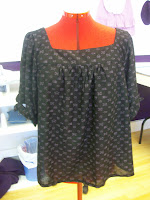 And, I got to sew a few things this past week one being another top and some baby clothes. I so love sewing baby clothes!

I really need to do what I teach because I didn't wash this fabric since it was a knit and I didn't think it would shrink. The ink came out all over the machine, my hands, the table. It was like working with news paper!   I really like wearing this style of top. I love square necklines!

With the kids back in school the classes are starting to fill quickly!!! If you want to come to class you better give me a call/email/text to reserve your seat. You can always check the calendar to know when the class is full