Seriously, I can't believe it's September! These weeks are just rolling past quickly.

We had another week of great sewing at the studio. Some classes were full, some were empty which gave me time to do my sewing. There isn't enough time in the day to get my fill of sewing. I love, love, love it!! As much as I love my family when they do sweet things (like my daughter going out the door for school last week, forgetting to give me a kiss goodbye - runs back in the door with her backpack on, throws her arms around me and runs back out the door) my desire is to be creating things with fabric at the girl cave. I can't get my fill of sewing and I just love passing my knowledge to others so they can catch the sewing but too. 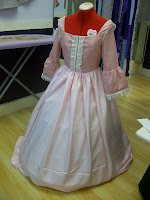 Sofia is almost done with her Halloween costume. It's really coming out good. She worked on the skirt this week in class. The only thing she has to do is put buttons down the back of the bodice and the hem. I love what she did with this dress. There were a lot of changes along the way but she made it work with me taking her through step by step. 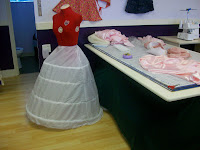 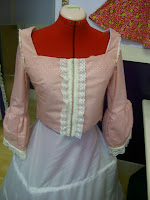 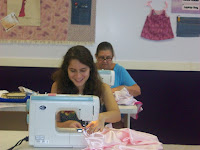 This is Sofia in the front smiling because she sure has caught the sewing bug. I just love seeing smiles when people creating things out of fabric.
Behind Sofia is Debbie. She's another student who drives far to take my sewing classes. Debbie's working on a handbag, a project that has been sitting around for years. The instructions were kind of funny (like they sometimes are) and had her do some funny things so I showed her an easy way to construct it. 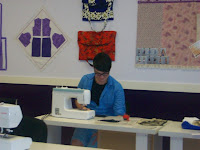 Then there's James who just picks up sewing so quickly. He's another young designer who has a bright future ahead. It was nothing for him to absorb all the knowledge I had to offer in the machine and cutting class. This week was his first sewing class making a pair of jeans.
He's using dark denim fabric and pulled out white thread. I looked at him at the start of class and asked if he really wanted to do that because you have to sew really straight when you use contrast thread. He had no fear which was great. This is his first sewing project and I can't believe how straight he got his stitch lines. 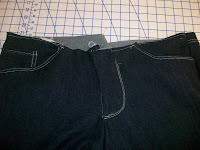 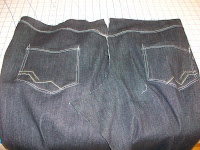 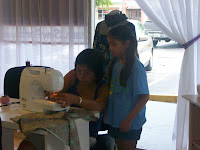 Megan really wanted to learn to sew, I mean really bad. She loves sewing at home. When her mom Sonia called to ask if I did kid classes I had to explain that I don't schedule them because when I do I don't get any enrollment. I have the kids attend adult classes with their parents. The parent only has to pay a $10 guest fee and they get to learn too.
Sonia bought the package deal. Her and Megan came to the machine class. Sonia attended the cutting class alone because it's hard for kids to learn all the cutting things, they just want to sew. They both returned this week to the sewing class making pants for Megan to wear. The pattern called for darts and zippers but we decided to do elastic at the top which is much easier to do for little Megan. ... and Megan caught the sewing bug at such a young age. Imagine the world of sewing ahead of her.. all the things she will create. Makes me shine :) 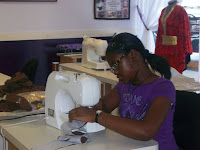 Rachel was back working on her vest. She cut the project out at home. I encourage my students to do as much sewing at home and when they get stuck to bring it in the studio because this is the way you learn. You can't just learn how to sew by attending a sewing class. You will forget how to do the techniques you learned if you don't try them on your own. Rachael had a little problem cutting and we didn't figure it out until we went to sew the liner to her vest. She forgot to cut it out and didn't have enough fabric to cut the pieces needed. She had other fabric that she wanted to use to make a blouse to match the vest. We could have used that fabric but class ended so I sent her to the fabric store before she returns to class next week. 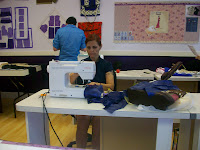 Estee came to class a couple times this week finish her skirt on the first class and starting a Halloween costume in the second class. She's making a Snow White costume. She came to class with all her fabric cut and ready to sew. The first things she had to do like in most projects were her darts. She also made some piping to go in the center front seam and installed that.  There are so many different fabrics and colors to this costume, it really took some thought process for Estee to cut this project out herself and she did a perfect job! I can't wait to see this come together like we did Sofia's. 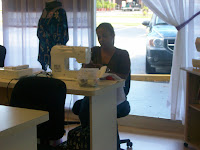 And last but not least is my sweet student Cristina. I love the projects she does, how she shares so much of herself with me and other students. Her and Debbie found out they lived in the same area and know the same people. It's such a small world, we're all connected in one way or another.  Cristina's so sweet, she brought something in for Iris except Iris wasn't able to come to class this week (you were really missed this week Iris - hope you can stitch with us next week)  Cristina is working on a baby outfit. And the funny story is she bought this pattern when her daughter was born. She's now 10yrs old. How many of us have projects hanging out for 10 years waiting for us to get to them? (raising my hand!)
Yes I only took my camera out during one class but I flipped a lot of pictures in that one class LOL. I was happy to see Randy back in class this week. She's been coming to L2S for a couple years. She was away for most of the summer and returned with some cloths she's had for a while she needed to alter to fit.
People finishing things this week that have been hanging out for years. It's good to get the cobwebs out.

Until next time, Enjoy your moments ~ make them "sew" much fun, Cindy
at 9:47 AM