Last week was a lot of fun at the studio with many new people learning all kinds of things taking off on their sewing adventure. While others calling to find out when they can start. With all the phone calls I got last week the classes are going to start filling up so you better call to reserve your seat if you want to come to class before there isn't one for you. Saturdays have been filling up 2 weeks a head of time - if you're waiting to reserve your seat for a Saturday you better not wait long. 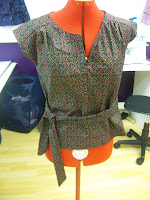 Kristen finished her 3rd sewing project making this top. When she makes things she likes she sews beautifully (like most of us) Her second project was an apron because I told her it would be a good thing to make on her own to follow the instructions so she had a better understanding of the instructions on her own. She didn't make the apron so well but the top.. beautiful!
My goal is to get my students sewing comfortably at home. The only way they can achieve this is to sew at home. When they get stuck and don't know what to do is when I want them to come to class to find out how to get over their hump. Most of sewing is just building habits so there's less thought process (when you have to use your brain is when you can get in trouble LOL)

I'm very proud of Rosa. This top was her very first sewing project. She's the type of person who puts all attention into details. She wants to make sure she understands every part of the process of learning the machine, cutting her pattern and constructing the fabric to learn how to do many things. She's spent many hours in class this past week. I think she's caught the sewing bug because with all the hours she came in during the week she put herself on the waiting list for Saturday's class which she was able to attend. 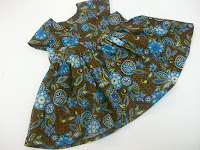 Cristina finished her little dress for her baby in the belly. It came out really cute! I love sewing baby clothes. They're really fast and easy to sew and don't take a lot of fabric. Cristina came to class with another dress cut. She understood the process of making the first dress so I suggested she try to make it again at home. And just so her husband knows she does come to sewing class (because when she showed him my blog he said "where's your picture?") here's a couple of pictures of her.... 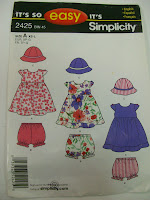 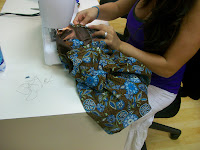 Other students who came to class this week:

Zena almost finished her dress with only 4 hours of class. We had some fitting issues where we had to monkey some fabric in the side seams to make it bigger. We also took out the back darts because we needed more fabric. It's easy to cut out fabric when you make it too big but its hard to add fabric when its too small.
Gilsa finished her black dress she's working on with only having to sew her sash to wrap around the dress.
Fatima (who has been a student of mine moving with me in all 3 locations) returned to class this week to make some drawstring  pants. I hope she returns with Luiza (because I miss my - started off being my sewing student and now my friend - Luiza)
Michael is a Miami Fashion student who needs help with his sewing skills to pass his fashion class. He came to cutting class with a sloper so this is what we are sewing .. with muslin.
David came to cutting class to learn how to sew scrubs. He's another student that absorbs all the knowledge being tossed his way. I don't have to repeat myself with him.. he just gets it. Not very many people have the ability to learn this way. Throw some words at them with a little visual and they understand and retain what you've told and shown them.

Debbie finished sewing a UFO project that's been hanging out for years. It was a handbag that was a crazy constructed way to do it in the words only instructions. She took word by word, broke down what they were telling her what to do only needing help on a few steps.
Mother/daughter, Sonia and Megan came to class and finished the top to go with the pants they made last week. I gave Megan an easy hat to cut out that she can make at home while her mom used the machine to sew a skirt she cut out in cutting class.
YEAH!! Yasmin came back to class this week! I'm so happy to see her again. She started with some scarfs wanting to use my serger but the dang thing wasn't threaded right and I couldn't sit and get it going. She ended up cutting out another project, a top.
A lot more people came to class... but.. Iris, you were missed this week and we hope to see you next week! :) 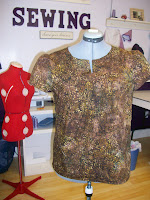 Lucky me!!! I got to sew a little this week too. I made this top in a couple of hours. I kind of cut this out while I was talking on the phone. I always know I need to leave room for my big old arms which I didn't do because.. yes, I was on the phone. I didn't realize it until after I made it, put it on and could hardly get my arms in. It looks real nice on the dress form.. where it will stay in the studio. I've been wanting to take the kimono that's been on there forever.

Next week I will be closed most of the week because Mama's going out of town without the family for a few days. I so need to get out of SoFlo and recharge .. or just slow down for a few days. Classes will resume on Thursday evening. The week after that I've added 5 more hours to the week. More sewing in the girl cave!!!!!!  I just can't get enough of sewing. I'm so lucky to have it bless my life like it has.