This past week I was only open Friday and Saturday because we went to Cape Coral for a few days. I really intended to write a week in review for the week before while I was away but... I didn't :)  Yeah, I've been taking it easy for the summer not keeping up with my blog post series. I promise when the kids go back to school tomorrow I will be back on track. I kind of set the blogging thing aside for the summer because it started feeling like a chore and not so much fun so I took a little break.

So, here's two weeks in review. I didn't take that many pictures again for doing two weeks ~ and it's always slow the week before school starts (another reason why I took off last week)


10 people attended the machine classes with many of them learning their own machine
5 students attended cutting classes
23 attended the sewing classes learning to alter clothing, make their own designs come to life; sewing blouses, aprons dresses, pants, skirts, dog collars and accessories, vest. Yes we construct a lot of clothing at L2S. 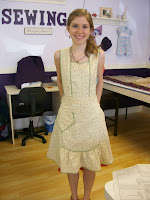 Emily was given a gift certificate for a package deal of sewing classes. When she came home for the summer from college she came used her gift. She's the sweetest thing and did a beautiful job sewing this cute apron. 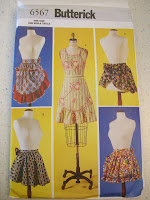 She made Butterick 6567. I tell people if they want to make something easy to start off with an apron but I leave it up to them to decide. This was not an easy apron though. It had many pattern pieces with bias tape finishing off most edges. This took her a long time to make but she took her time and did such a pretty job. She's sharing an apartment this year in school. I asked when she was going to use the apron and she replied as soon as all the roommates arrive. I hope Emily keeps up her sewing during the school year. 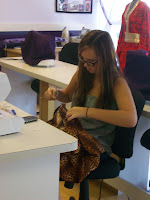 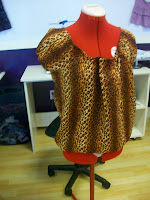 Kirsten is another teen and has been coming in for a few weeks. She's one of those students who totally understands the concept of putting the fabric together. It just flows with her. She's sewing tops. This one is really cute. I love the fabric she picked. It took her a few times to get the casing right so the elastic would slide through easy. After she made enough room sewing straight stitches you can see her using the looper to pull the elastic through because it bounced back in the casing when she thought she had it attached. Well, you know how sometimes things just happen? I went to take a picture on the dress form and the elastic popped again. That's why the neckline looks a little funny and not all gathered up. The class was over so she said she would fix it at home. I love when kids learn at her age. I just know what the future holds for then when they learn sewing young.

Sofia finished her dress I showed you in my last week in review. She came to class this week with a new design using her basic pattern to construct a Halloween costume  Marie Antoinette custom. That's right... Halloween. It's time to start thinking about costumes.  I love teaching Sophia. She possess a lot of patience working through her design changing darts and seams to make her envision. This is my kind of sewing. I call it extreme sewing where there no rules and you just work with the flow of the garment. 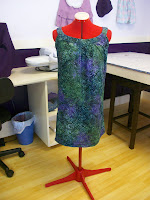 Friends Kirmaya and Jocelyn have been coming to class together this month. I've talked about them before. They finished their dresses. Kirmaya didn't want to be in her photo. She's another one who I just love the fabric she picked out. And she looks great in this dress. She had a few spots on the fabric that didn't get any dye and she didn't notice it when she bought the fabric. (this is why I always roll out what I'm going to buy and inspect both sides of the fabric.) She used some fabric markers to get rid of the white spots. 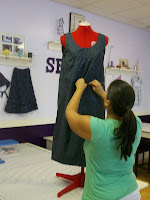 I sure hope Jocelyn got her sewing machine by now. Her father bought her one and was shipping it to her. Her father sews (how cool is that) and has always done the sewing for their family when needed. She wanted to take her time making this dress to make her dad proud. I told her he would be proud of her no matter what she did. In this picture she was pinning the casing for the drawstring to run through. I had her do it at eye level so she could get it straight all the way around. OK, she was almost at eye level. Better than kneeling on the floor.
I'm so proud of my student Rachael who started at L2s attending summer camp. She's only 11 years old, has her own sewing machine and is learned how to sew a skirt with her last project. I try to tell my students all the time; after they take the cutting class and learn how to cut out patterns to do it at home to save time in sewing class. Rachael cut out her very first project herself and did it all right! So after she finished her skirt she started on a vest that kind of looks like a top.

We've had more boys in the girl cave. Scott (who is a big construction guy) wanted to learn to sew to make dog collars and accessories. He already has a sweet little business called potcakecollars.com. they sell island dog collars and Hawaiian bandannas. Go check them out. It's a really cute site. And he also blogs! Gotta add him to my reader. He loves dogs and has some cute pictures of them on his blog. And go to his site to find out what potcake means. Learn something new everyday :) 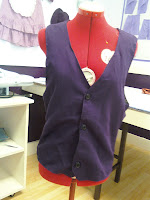 The other boy in the girl cave lately has been Corey. He's another teen who wants to be a designer. For his first project he made a vest. It took him a couple of classes to make it. Corey needs a machine at home so he can learn how to drive the machine a little straighter. He used his seam ripper a lot in class. A few times pulling out buttonholes that didn't sew so well for him. When he was done with the vest he cut out a skirt and started sewing it before class ended.  Another thing I tell my students all the time is you never start off making gold, you have to practice to make the gold. Corey's on his way to making gold.

With the kids back in school this week there will be a lot more running around back in the carpool pickup line and the dreaded homework but I should find more time to blog again. I also hope there's more time for me to sew because I feel like I cut out things weeks ago and haven't been able to get myself behind a machine to make my things. I need to sew... never enough time to sew is there?

The only class full next week is Saturday (which always fills quickly) so if you have hours you would like to use (and there are many of you who've paid for class and haven't been in for a long time) give me a call and lets schedule you some sewing time.

Until next time, Enjoy your moments ~ make them "sew" much fun, Cindy
at 8:12 PM