We had a FUN week of sewing ending the week with a film crew coming in at the end of class today to film Christopher for TV. It will be on the air next week on Ch 23 which is a Latin station so I really don't watch it but a few of my students who were in class today watch. I was told I will be able to embed a video after it airs. I'll tell you more about this later when I have the video to share. It was fun but a little hard to do while I was still teaching a class.
This was a busy week at the studio with many people learning and loving the art of sewing.

5 people attended the machine class to learn how to use a sewing machine.
4 people came to cutting class to cut kids cloting, skirts and a top
25 people attended sewing class making so many different things the list would be long if I typed it out but here are a few... 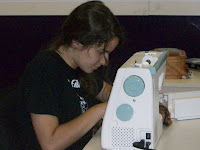 Sophia came to class with a sketch of what she wanted to make. She didn't have a pattern so I went into my patterns and showed her how she could use different patterns that are already made to use for her own designs. We used a t-shirt pattern for the top and a skirt pattern for the bottom.
This is what her sketch looked like... 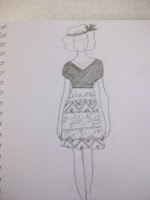 And this was her dress. Since we had more fabric in the top than we had in the skirt I gave her the option of making bigger seams or gathering the extra fabric in the front.
You can see what she chose. 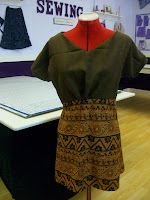 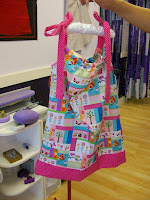 D
Denise came back to class this week with a project already cut and finished this cute little pillow case dress by the end of class for her daughter. So, you want to hear how small of world we live in down here amongst the 7 million who reside in all three counties of SoFlo?  Denise told me about being in her parents place of business. She was talking about how she's taking sewing classes in Hollywood. A lady there chimed in and said "I know someone who teaches sewing in Hollywood, it's right across the street from where my daughter takes dance."  It's one of my daughters friends who's shes been dancing with for many years. And, I also went to high school with her. Oh, did I mention Denise drives almost an hour to attend sewing classes? Small world huh? :) 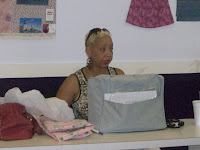 D
It took a long time for Dollar to attend sewing class. We had been talking on the phone for over a year. Life has had a way of taking Dollar away from her sewing. She has been sewing for years and has many patterns and sewn most of them over the years. She bought a new sewing machine and didn't know how to use all the things that came with it and didn't understand all the bells and whistles. So, she's been coming to class to learn how to use all her feet and what stitch goes with each foot. She's also spent several hours practicing a welt pocket. She made the pocket several different times until she made her gold and could understand every step of the construction process. We have a lot of fun having Dollar in class. She was so nice to bring me a pineapple shoot so I can grow a pineapple with the kids. 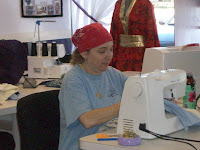 R
This is Randy. I've talked about her many times on this blog. She's been coming to class for a few years. She does amazing things with recycling old clothing, mixing up ready to wear clothes and doing all kinds of things with fabric to make the cuties clothes for her kids and herself. The best thing about Randy is she isn't a perfectionists. She goes with the flow of her project and has great ideas. She comes up with things I would never think of. One being the project she's working on now. She cut up a bunch of boxers to make a skirt. I've taken so many pictures of her projects that I have no idea what happened to the pictures when I go to post. I think they are on the camera and when I go to upload them... poof they're gone. 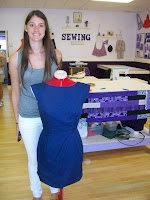 The last sewing class Tiffany attended she was what I called "dart hell". If you notice her dress you can see all the darts, 28 total... BEFORE we could even start doing any seams. This is a cute basic blue dress with a white liner. Tiffany's going to design school, this is her first sewing project and she did a perfect job on it, and the dress JUST fits. Before she left class I pulled out my sewing project which is another pair of jeans. I told her how she can use a seam ripper to pull jeans apart to make a new pair. So, looks like jeans will be her next sewing project. 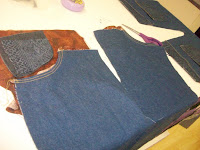 I had so many more people attended class this week, a few I haven't seen in a long time. These were the lucky students that got their picture taken  because I remembered to pull out the camera when they were there. I really wish I would remember to pull out the camera on Saturday because I have a great group of people who come on Saturday. And today with the TV cameras there was even more special... wishing I had a camera. But hey, I can't do it all and don't even pretend to. It was a very fun week of sewing at the studio. I even got to ALMOST (I really wanted to finish but didn't have enough time) finished sewing my pants.
I'm runnig 2 machine classes next week with one seat available in both and most of the daily sewing classes are full. This is my busy time of year when everyone's dreaming about sewing and just have to learn the art. I also have Week 2 of Summer Camp starting Monday which means Wednesday and Thursday morning sewing classes are canceled this week and next for week 3 of camp.
Until next time, Enjoy your moments ~ make them "sew" much fun, Cindy
at 10:34 PM