Yes, that's right. It's officially summer with the kids getting out of school on Wednesday. And that's a big reason why I'm a day late ending last week when we've started a new one with today.

Not only did more people attend class this week but I was able to make a few projects too.

8 people attended the machine class on their way to a wonderful world of creating.
5 people learn how to cut their patterns on the fabric in the cutting class.
15 people attended sewing class to sew their projects, learn sewing techniques and alterations.

There's one person I would like to brag about. That's Christina. I love having her in class. I feel she has so much knowledge (I've learned a few things from her) I wonder why she comes to class. She say's she doesn't know construction well and didn't know how to put together this little dress she's been working on. Now the bragging part. Check out her hand embroidery. It's so beautiful! She's doing the same flowers around the base of the dress 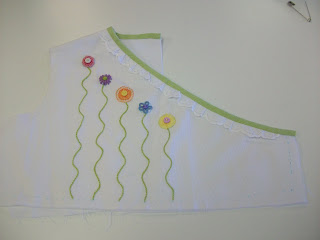 She almost has it constructed and since I showed her how to put the bodice together with the liner she will be able to finish it at home.
Then here's Rachael who's been coming to class with her mother Gladys. They both attended cutting class Saturday and stayed around for the first couple hours of sewing class. Rachael's making pants and Gladys is making a top. They are almost done with both since they've used easy patterns. 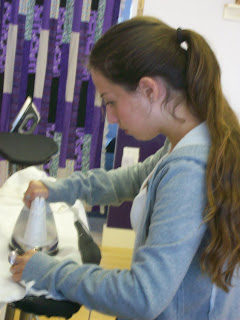 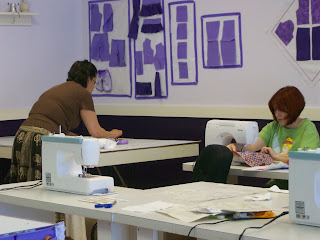 T
Terri came back to sewing class to work on her own making little tissue holders out of (what else for Terri) Disney fabric. She's making all these little gifts for a cruise she's going on in September. When you want to sewing class just to hang out and sew with us (and don't need me to teach you) you only have to pay $5 an hour to sew with us. You can see Terri wearing the green shirt above hard at work at her Disney sewing machine.

Yasmin's been coming in to make scarfs. Some of the fabrics she's working with isn't easy fabric to sew or press. I've shown her several different finishing techniques. She also bought some fabric that had a lot of markings on it (like sticky tape). She didn't notice it when she bought it. It happens to all of us buying fabric that has marks right in the middle and you can't use it. This is why I tell people to roll out how many yards you want of the fabric and inspect it first before you bring it to the cutting table.  I really love having Yasmin in class. We have a lot of fun together. 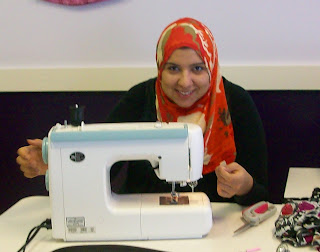 There were many classes when the camera didn't come out. Many more students came to class but I'm only going to share the ones I have photo's of. It really was a fun week of sewing...

Since school is over I can show you the bag my daughter made for her teacher. She picked out the fabric from the stash. It has a school theme to it. 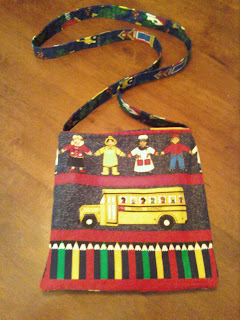 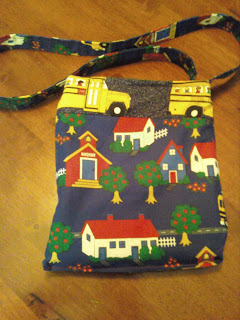 This is going to be a summer camp project. Speaking of.... the seats are going fast. I'm only offering 3 weeks of camp this year so hurry and do your enrollment if you plan on attending.
Another reason why I'm a day late doing this week in review is because we needed an Aladen costume for the dance recital next weekend. Little one and I had a sewing date yesterday. It took us a few hours to do because I just cut the fabric and went with it. We needed a small size 5. Ally did a few seams in the pants and I made the rest. It's nice to have several machines because you can set different colors of thread on each one. Makes the process faster. 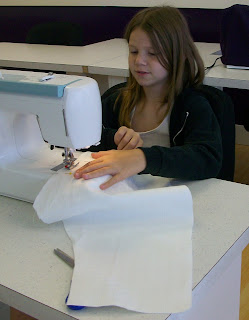 I hope to see you in class this week. If you haven't already reserved your seat let me know what class you want to attend. Some of them are filling quickly so let me know soon.
Until next time, Enjoy your moments ~ make them "sew" much fun, Cindy
at 2:35 PM