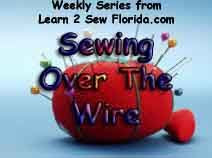 This is a weekly series where I share sewing news I receive with you.

Enjoy your reading.
About People:
Pretty easy, sew to speak
Monash Journal Sun, 28 Mar 2010
EIGHT dollars won't buy you much at a clothes store. But for $8, you can learn how to sew from a woman who has taught dressmaking for more than 40 years, owned three sewing shops and made half the clothes in her wardrobe.

Cute, custom kids clothes and more
News-Democrat & Leader Tue, 13 Apr 2010
When Karen Logan became a mom, she put her sewing and crafting abilities to work creating cute clothes and accessories for her girls. Now sheâs using those talents to make unique items to sell in h...

Sewing good deeds
North Platte Telegraph Tue, 13 Apr 2010
The North Platte Telegraph Quiltmaking requires a fair amount of skill and knowledge. The process of making a quilt can also be an educational experience in itself, as proven by Laura Poe's sixth grade class at Lake Maloney Public School.

Serving others with needle and thread
Bangor Daily News Mon, 12 Apr 2010
Every day, women go about the world armed with sharp pointy objects. They take up embroidery needles, sewing machine needles, knitting needles, crochet hooks and rug hooks, and go off to do battle. ...

Sewing CafÃ© mends Parisiansâ relationship with home-made fashion
Times Online Mon, 12 Apr 2010
If your favourite shirt is torn and your belly is crying hunger then maybe you should check out the latest venture to capture the French imagination.

Ready to Wear: How times have changed since yours truly sweated over a sewing machine
Independent Sun, 11 Apr 2010
Aged 11, I made a zip-fronted, cherry red shift dress printed with white daisies for a school project.

Cinderella's Closet event in Aurora sees teens turn out for dresses
Daily Herald Sat, 10 Apr 2010
With nine daughters, Debra Terrell knows well that prom is expensive. To bring formal costs down, she said, the family does much of their own sewing. This year, they got a break.

Some teens find it's cool to design and sew their own prom dresses
Detroit News Mon, 12 Apr 2010
When Karynn Johnson steps onto the dance floor at her senior prom, she won't have to worry that any of her classmates will be wearing the same dress.

THE ARTISTS' JOURNEYS The five Gainesville Fashion Week designers showcase different styles THE ARTISTS' JOURNEYS The ...
The Gainesville Sun Thu, 08 Apr 2010
By Lashonda Stinson Curry For a certain group of people, planning for Gainesville Fashion Week Spring 2010 has involved late nights and sewing machines. This year five fashion shows are spotlighting clothing and swimwear from local, national and international designers. One designer has sent his fashions down the runway many times and the others are experiencing...

And 'sew' it goes
Berkshire Eagle Wed, 07 Apr 2010
CHESHIRE -- In a science classroom, finding a poster of constellations or a model skeleton or a row of microscopes wouldn't be too uncommon. But how about a row of sewing machines?

Itâs in the bag for entrepreneur
Bloomingdale Press Mon, 05 Apr 2010
An accomplished accordion and piano player, Kristina Giedra figured she would one day end up as a music teacher. But after graduating from a music conservatory in Lithuania, her native country, Giedraâs heart pulled her in another direction. âMy interest was more in sewing,â she said. Soon she was designing and sewing her own custom-made clothing.

New Products:
Janome America Opens up a Wider World of Quilting and Sewing: Introducing the Horizon(R) 7700 QCP
Marketwire Mon, 12 Apr 2010
MAHWAH, NJ--(Marketwire - April 12, 2010) - With the introduction of the Horizon 7700 QCP sewing and quilting machine, Janome America marks a high point of its 150th anniversary year. The machine is designed to give quilting and sewing enthusiasts greater ease and creativity in the construction of quilts and other large projects.

Giving Back:
Temporary Texans craft cancer care creations
Portage Daily Graphic Sun, 11 Apr 2010
Way down south, women from across the Canadian prairies spend one day a week all winter sewing various head dressings for cancer patients. Sheryl Doell, nÃ©e Fust, originally from Newton, is one of a group of women in the Pine to Palm Park in Weslaco, Texas, who sew turbans, skullcaps, scarves [...]

Circle of retirees sewing hope for cancer patients
Spartanburg Herald-Journal Fri, 09 Apr 2010
By DUDLEY BROWN dudley.brown@shj.com The Bethlehem Center has been a place for retirees to knit and sew for years. This week, the ladies donated 38 hats to Spartanburg Regional Medical Center's Gibbs Cancer Center.

Sewing hope for patients
Spartanburg Herald-Journal Fri, 09 Apr 2010
By DUDLEY BROWN dudley.brown@shj.com The Bethlehem Center has been a place for retirees to knit and sew for years. They give their wares to family, friends and anyone else they think can use them.This week, the ladies donated 38 hats to Spartanburg Regional Medical Center's Gibbs Cancer Center

Giving back, one stitch at a time
The Courier News Wed, 07 Apr 2010
There was a time when Esther Lavernz volunteered to sew the edges on quilts made by residents at the Vines of Countryside senior care facility in Elgin. Now a resident there herself, her eyes aren't what they used to be, and sewing fine seams isn't an option for her anymore. But that doesn't stop her and a dozen other residents from using their talents to make quilts for families in crisis.