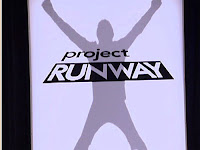 Are you ready for the Runway? Tonight's the final episode of season 7. We get to see what happened when they allowed 10 designers to show at the park. I love Seth Arron.. his hard edgy look. I hope he wins.
When the season started back in January I started another contest for my students to win 20 hours of free sewing class. The only thing that changed from my last contest was they had to sew their designs in class. The last time I let them sew them at home. Needles to say there were many sewing mistakes that couldn't be seen from the outside of the garment. This time I wanted to make sure everything was constructed properly to win the contest. And, even though I got a lot of exposure last time with the students promoting their designs to their friends, I didn't make any profit from this promotion. I thought I would get more people signing up for classes but that didn't happen. So this time to make this promotion profitable the students had to sew their projects in class.

Here's the deal; when PR season 7 started I spent hours on Lifetime's website and a few others to find out the schedule of showings so I could announce the deadline to turn in your entry form. I never could find the air date thus never having an ending date to the contest. Bravo always gave us the full schedule air date... not Lifetime. I asked my students to watch the show and when they tell us who's going to Bryant Park their entry forms are due.
Well, that date came on us quickly with no entries being turned in. I gave my students another week. Again no entries. Thus no contest. I can't believe not one person wanted 20 hours of sewing class. If one person entered they would have won. I was giving 10 hours to second place.
So, as much fun as it was the last time, I got nothing this time. I'm going to have to think about IF I want to do this again and how I can make it successful. When you're in business you try different things. Sometimes it's works, sometimes not so much but you keep trying.
Have fun watching the show tonight! GO SETH ARRON!
Until next time,
Enjoy your moments ~ make them "sew" much fun,
Cindy
at 7:53 AM