Say goodbye to February 2010 with this week ending.

With March starting we have to remember to "spring" our clocks forward in a couple of weeks on March 14.

I've decided to do the work and move as fast as I can at my new location. After telling my students about my move I'm hearing all kinds of stories of what goes on at this location that I never knew about. It's time to leave. Hopefully I won't have to cancel many classes. I'll keep you informed what it will happen. Sometimes you think you can do more than your body will allow. And I HAVE to watch USA play for gold tomorrow starting at 3pm. It's been a great Olympics. I only wish we got better coverage on tv.  .. Anyway, hopefully I can move ASAP at start classes at a better location with parking and not scary people hanging all over your cars smoking cigarettes using bad language and using the restroom at the dumpsters. (yes these are the complaints I've heard and why I'm leaving) 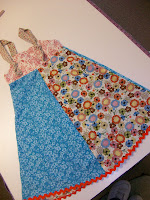 I have to say I was a bad girl when it came to taking pictures this week. I had moving on the mind and slapped my forehead after sewing class because I didn't pull the camera out to share. But as I always say, it's all good.

I have a couple of pictures from Sam who also blog's and takes beautiful photo's. You must go take a look but come back :) 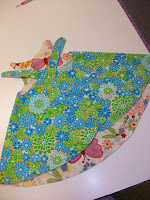 Sam has been coming in to make clothing for her photo shoots.  Both of these dresses she made before she started sewing classes at Learn 2 Sew. She finds her fabric in all kinds of different places. She's also promised herself to devote time to sewing at least once a week in class and sewing at home. It really is the best way to learn when you can sew on your own and ask question with someone when you get stuck and don't know what to do.
I have two students today who are making the same pattern, a dress. One, a black print, started it in class last week and the other,red, started it today. I promise I'll take pictures of both. One is installing sleeves the others not.
Scott took advantage of the pattern sale and bought several beautiful dress patterns. He worked on cutting out a couple of dresses. He started sewing one of them when he realized after scanning over the instructions he could accomplish making this on his own. The only thing he wants help with is the invisible zipper.
I wish I also took a picture of Laura's pattern. It's vintage 70's I think, a little tunic with pants. She made the pants today in class and realized how easy they were to put together she can make more on her own since she has her own machine.
Larry came in to sew more pillows. He learned how to sew some trim/piping to the edges. He has a lot of home decor things he wants to sew for his home. He also has a machine and can do more stitching at home.
*****************************
I was able to squeeze in a couple more hours of sewing to make this top that's been cut and waiting to sew for a few weeks. I'm not real happy with the way it came out. I'm going to take the elastic out in the sleeves and get rid of the clown look. 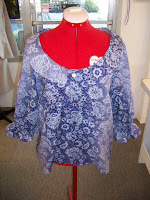 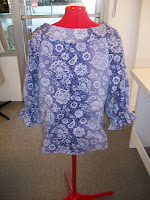 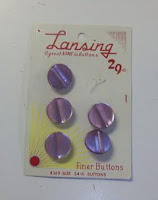 And you know you've been sewing for a while when you pull things out of your notion's that have a very low sales price on them. At 29cents I'm wondering how long I've been hanging on to these buttons. LOL

This will probably be my last project for a while until after the move.

In ending, hopefully I can show you our room makeover we did (or almost finished) next week in a post. We got the screw gun in the house now we need to put the screws in the wall to hold up the shelves and curtain rods. I'm gong to see if I can get it done in the intermission during the hockey game tomorrow - but I've learned to never expect because you will always be disappointed...so... We'll see.

Until next time,
Enjoy your moments ~ make them "sew" much fun,
Cindy
at 8:58 PM