Room Makeover - Say Goodbye to "Under the Sea"

We're in the process of doing a room makeover for son who's birthday is tomorrow. He's going from a kids to a preteen room.

I had tons of fun doing his "Under the Sea" room when he was 5 years old. I thought I would share the before pictures. 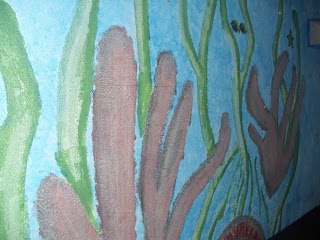 It all started with adding glow in the dark to the color paint to make the coral rocks. I wanted to paint them big so he would feel like he lived under the sea. Then came the green sea weed. This looks really cool at night with the glow in the dark paint. I tried to take a picture of it while it was glowing but as you can see it didn't work.

The walls were white. I mixed some colors together to make a blue color. After I painted the coral I used a sponge to swirl the blue color in between to make it look like water. This was the fun part - it didn't matter how good of job I did since water isn't one color. We did knockdown on the walls when we moved in which gave it a great watery look. 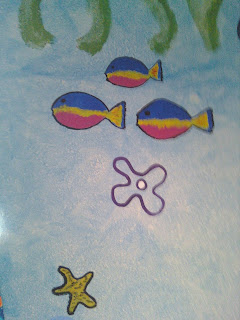 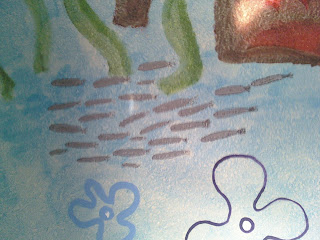 First of all - a painter I'm not. I tried my best to paint what's in my mind. Sometimes it doesn't come out the way I want but hey - that's art, right? I did the best I could painting fish around the room before I got tired and found a shower curtain with fish I cut out and glued on the wall. 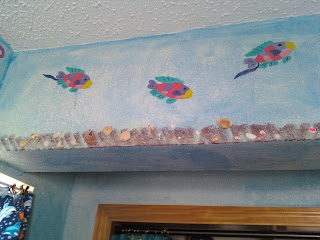 Because his room was a garage at one time before we bought it he has this header going down the ceiling. I used the glow in the dark paint to do the edge and glued shells we found on the beach along it. After many years of him jumping up to hit the wall he's taken down most of the shells. Can you see the hot pink the room used to be painted under the ones he pulled off? 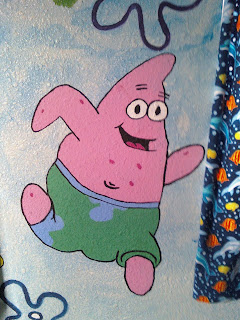 Then came Spongebob and Patrick. I drew this on the wall before I painted it. When the kids were babies and shared a room I painted the teletubbies, elmo, teddy bears and others on the wall by taking clipart or pictures out of a coloring book, took them to kinko's to have them blown up 300% then traced them on the wall. They came out a lot better then these two. 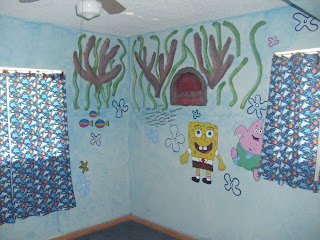 I bought some fish fabric to make curtains. I wanted to hang them on "real" curtain rods but that never happened. I also wanted to paint a treasure chest and hang some netting that didn't make it. Always UFO's in everything huh? 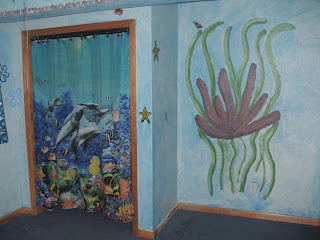 I found this other shower curtain to hang instead of closet doors since the doors are never closed anyway.
We took everything out of his room Friday night. Primed the glow in the dark paint on Saturday (and it still kind of shows through) Painted the color on Sunday. Painted the shelves yesterday. Bought some new curtains at Target because they were on clearance and I couldn't buy the fabric for less then I paid. Hopefully if the daddy brings home his screw gun tonight we can hang everything and I'll have pictures of the after tomorrow...

Until next time,
Enjoy your moments ~ make them "sew" much fun,
Cindy
at 4:59 PM

Email ThisBlogThis!Share to TwitterShare to FacebookShare to Pinterest
Labels: Sharing