With the Pro Bowl today and the Super Bowl next week South Florida is a football party place right now. You can go to any city close to the beach and there's events happening. Ft. Lauderdale beach looks like it did back in the day when all the college students would come here for spring break. It's a slow ride down A1A. My city of Hollywood had a big party downtown with NFL players last night.

This past week at L2S ended the month of top contest with two winners Belen and Isabel both receiving 10 hours of sewing class. Congratulations to you both! 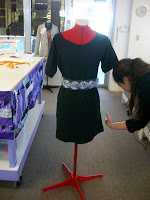 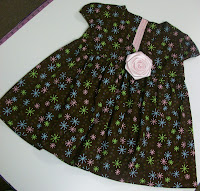 Let me start off by saying I wish I would write down the pattern numbers my students use. This is something I'm going to get better at doing. One thing I did do this week was take pictures. I have many to share.
Daniele made a knit black dress as her first project. It wasn't easy fabric to cut or sew with it's curling at the edges. I told her through the whole process not to have high exceptions for her first project but I think her little black dress came out great. She brought in some trim with her. She hasn't decided what she's going to use or how she wants to use them so we just wrapped it around like a belt for the pictures.

Sam who does photography (go check out her work because she is amazing) wants to sew clothing for her photo shoots. She's been doing some sewing at home but just needs a little help on technique. She came to class Friday afternoon and we had these pants made in an hour and half. She used an old sheet to make them. She's been doing thrifting to find her fabrics to use. She has some great ideas for bright color fabrics she's found in all kinds of recycled things.

Isabel (one of the month of tops winners) made this little dress as her first project. She's picked it up and put it down to work on other projects but this week we got to finish it. The pink zipper doesn't look that great in the picture from the inside but when her little neice wears it you will never see the zipper from the outside. She emblished it with a pin flower that can be taken off and put in other areas of the dress, hat or anywhere the little one wants to put it. 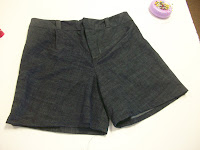 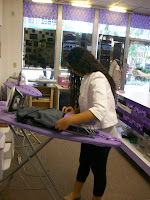 Sally is a friend of Belen (one of the month of tops winner) They both are 13yrs old and go to school together. More friends sewing together. Sally finished her shorts she's been working on. In this project she learned how to install a fly zipper, how to do carriers which she found out were belt loops and how to install a waistband. These shorts fit her perfect and can be worn right now since we are having warmer weather. This was her 4th sewing project. 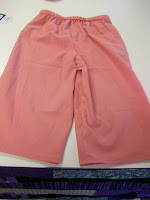 Erin came in with her friend Jennell last week to cut their first sewing projects. Jennell's making a dog coat and Erin's sewing a toddler outfit with a gifted pattern and fabric. Pants are real easy to make so I suggested we startd with them. She was able to make them in the 2 hour class. We cut the size 6. The pants look a little big to me in the picture but like always after she does a fitting it will be very easy to take them in a little. But then again sometimes kids like big baggy pants. You never know. Next week she will be working on the top. Jennell's almost finished with her dog coat with pictures to come next week. 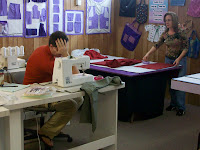 This is Brad working on his pants. Sometimes you have sewing mojo and sometimes you don't. We were able to install the fly zipper and work on the side seams. It seemed like every stitch he made in class this week he had to pull out. This is him working with his perfection tool. I can only imagine what he's thinking to himself "I have to pull it out AGAIN!" He's real good with his perfection though. There have been times when we've said "lets just move on. 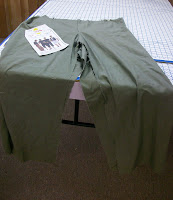 So, He's making Burda 7768. The measurements were way off because his pants are huge on him. We got this far, he did a fitting and WOW. I really wish I had done a tissue fitting with him before we cut out but .. one of those times when you wish you could go back in time. He's decided he's going to make them for his father. Since he is going to give them to his father I'm glad we decided not to add all the pockets the pattern called for. Brad wasn't ready to do the welt pocket so we elimitated them. He does have his own machine so I gave him homework finishing his seams. 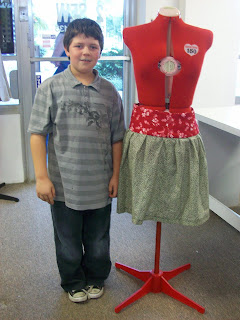 Saving the best for last is our little designer Christopher. He made this skirt as his first project. He learned how to do gathering, insall a zipper and how to install a waistband.

Yesterday in class we worked on sewing together big square pouches to carry his artwork in. We're basically making big envelopes with batting to protect his is drawings while traveling. Christopher's learning the art of sewing but he has mastered illistration and drawings. He does amazing work. Some of his artwork is for sale. I'll have to get some information about that to share with you.
I didn't have any time to do my own sewing this week. My projects are still in their baskets waiting for me. I hope to have some free time next week.
Next week's classes:
Zippers Tuesday 6-8pm
Sewing Wednesday 11am-1pm and 6-8pm
Sewing Thursday 10am-2pm
Machine Thursday 6-8pm
Machine Friday 10am-12n
Sewing Friday 1-3pm
Cutting Saturday 10am-12n
Sewing Saturday 1-5pm
On a parting note to end the month of January, I didn't get that many people bringing in their new machines they got as a holiday gift to learn in the machine class. Usually I'm moving all of my machines to make room for the students. We used my machines a lot this past month. Could it be the economy and people not wanting to put out a few hundred dollars right now? We're all cutting back..... and so many people need jobs here in SoFlo. Hopefully the Supper Bowl will help some people.
Until next time,
Enjoy your moments ~ make them "sew" much fun,
Cindy
at 9:46 AM