Last week started out slow and ended with a bang - a bang of cold air that is. 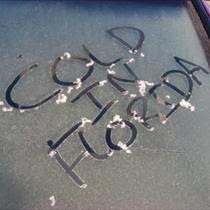 Last Snowfall In South Florida Was in 1977

PEMBROKE PARK, Fla. -- Snow flurries were reported across the state and even in South Florida as a strong cold front moved into the state on Saturday.Trained spotters reported seeing snow flurries in Oakland Park and in Kendall.Sunday night is expected to be the coldest night yet with temperatures in the 20s and 30s.


You have to check out some of the pictures of the Port of Miami yesterday when the cold rain hit the water. We don't see stuff like this in So Flo. We have snow but everything is still green :)

8 people attended the machine class learning how to use their brand new sewing machines.

The week started off very slow on Monday and Tuesday at L2S with no one attending class (I call it the holiday hangover) which gave me some time to knock off an item from my sewing list. More pants. I just have another 20 minutes to finish the waistband and their done. I don't have a lot of winter clothing (that fits) and since I don't want to do laundry everyday I think my next project will be a jacket or some long sleeved shirts.

By Wednesday morning I had a full class with the students working on making a pants pattern from an old pair of pants, kids bikini, pants hems and a toddler dress.

It slowed down again until Saturday. I had a full cutting class (I kind of overbooked - it was a full classroom) Some of the people who cut out their projects stayed for an afternoon of sewing class. Brad came in to almost finish his dog bed. Scott is working on his next beautiful dress that's been in the process of doing for a few weeks. Lauren got most of her pencil skirt made. Sally has been working on some shorts and should have them finished next week just having to finish the waistband. And Isabel started on a toddler dress she started last week, decided to set it aside to make a t-shirt. She learned quickly what it was like working with knits. She did finish her shirt but I forgot to take a picture of it. She was the only one this week with a finish shirt so it looks like right now Isabel is in first place for the January Top Contest.

I will be announcing the new Project Runway Contest when the season starts on Thursday. There's a few changes to the contest rules.

No pictures to share of sewing projects. I had my camera but was involved in teaching I forgot to pull it out ALL WEEK! My bad! I promise to do better next week.