Success comes with trying different things and continue doing the things that work. Some things don't work but you never know until you try them.

After watching the month of tops blog and having fun seeing what everyone made, I had an idea to run a top contest. Tops are very easy to make. Sometimes you can make them in a couple of hours. My hope was to get my students to come to class during the month of January to make tops. Lots and lots of tops.

Well, sometimes things don't go as you want. I only had two students who made tops during January, Belen, and Isabel. They both made 2 each so they both win the 10 hours of sewing class. 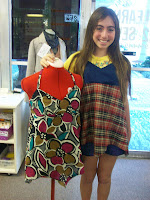 Belen came to class a couple of weeks ago to start the top on the dress form. She was excited to play the contest because she really wanted to win the 10 hours of sewing class. We got as far as the bodice and never got around to adding the bottom of the blouse during that class.

She came to class today with the same pattern cut out of different fabric. She had to do a little of work on the first top to finish it before she could start the second one (the one she's wearing).
She only had 3 hours in class today to finish. I really didn't think she was going to get it done but much to my surprise at the end of class it was complete and we were taking this picture. 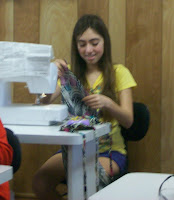 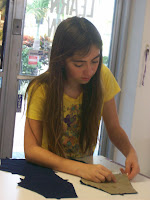 This student really does have sewing inside her. The first time she came to learn how to use the machine in the machine class and I had her sewing squares and circles. The more stitches she made the more she had a glow about her. Oh, did I tell you she's only 13 years old?
As I told her mother today, I'm so excited for her because I know this will be with her the rest of her life. When sewing is inside you like it is Belen, you carry it with you for a lifetime. 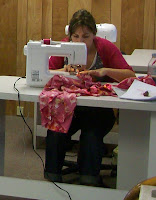 In 4 hours Isabel made her two blouses. Unfortunately I didn't get a picture of her first top she made a couple of weeks ago in a 2 hour class. It was a t shirt made out of knit. Knits are not easy for someone who's just starting out in sewing. She brought down her perfection level some so I could show her how to construct the garment.

Her second blouse was a copy of one she already had. She made her own pattern and to make this cute top in no time at all.
I suggested she get another fabric to add to the bottom of the sleeves to give it a more professional look than an everyday sporty kind of look it has now. So off to the fabric store for her to buy a little trim. We'll add this next week when she returns to class.
It would have been fun to have more people playing but hey..it's great for the two who did play.  I don't think I'll be running another contest like this one...but... you never know , I just might LOL
Until next time,
Enjoy your moments ~ make them "sew" much fun,
Cindy