Oh snap. That's how fast that week went by. So much to sew, so little time to sew.


I don't get many people wanting to attend sewing class this time of year. No one attended class Monday or Tuesday which gave me time to do my sewing.  More about that in a minute. I actually had a full machine class this morning. The only full class of the week.

1 person attended cutting class to learn to cut out pants.

Andrea started her pant and vest a few weeks ago. She did what she could at home with little equipment she had. She would come to class with everything pinned together ready to go. It took some time to get the pants to fit. As always I think we could do some more tweaking to the pattern to get that TNT pattern. 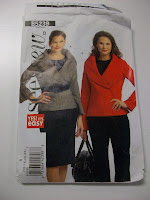 Nikima came to class last Friday needing help cutting out this jacket - See and Sew B5239 - a very easy jacket to construct. She came to sewing class yesterday for two hours and got most of this jacket constructed. Then she came back today to finish it. The picture doesn't look that good because the garment is a few sizes bigger than the dress form. The next time she makes this jacket she'll need to give a little more room in the arms. She has the same problem as I, not having room for the upper arm wings. She's another student who think she struggles through each stitch saying "that one was hard" but when she get's done she makes these beautiful things. This was her second sewing project. Nikima was all excites and had the sewing glow as she walked out the door today after making this jacket.She still has the buttonholes and hand sewing the liner down to finish this project.

Brad is making a dog bed, Pat and Anne are working on dresses. Their pictures will be taken when the projects are completed. They will be coming to class next week. And Iris who likes to come in to sew with us every Saturday finished up some of her projects that have been hanging out for a while. If I don't have to teach you but you want to come sew with everyone you only have to pay $5 an hour to stitch and bitch.

I'm only doing 3 classes next week then I'll be closed until January 2nd. 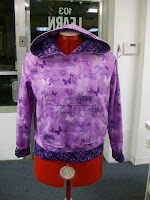 My sewing this week:

Monday I was able to make another Hannah Montana jacket for my daughter because the other one she cut out didn't fit.
I made Christmas PJ's bottoms for both kids. I still have to make t-shirts to go along with them. I also made a couple extra pairs of pj shorts for my son because he loves sleeping in them.

I covered some compisition books to make the kids journals.

I'm working on my mom's lap blanket with the kids pictures from the year on it.

I'll take some pictures and show you next week.

Hopefully I can get some pants cut out and sewn up for myself before Christmas.

Another thing that happened this week was that bad storm that blew through South Florida Thursday night zapped my AC unit at the sewing studio. It took out half the building. The AC man and electrician were able to get the other tenants running but it looks like I won't have air for a week or so. It's a good thing this is my slow time and I'll be closed for a week. And, we got a little ,cold front blow through after the storms. We only got to 74 today, Thankfully!

I still have some gifts to buy. Do you hear that? Tick Tick Tick - 2010 will be here before you can say - Happy Holiday!

If you're having some really bad weather like we had this week - stay safe!