Blame it on the Full Moon

I don't know about you but this has been a strange week.

First I started off sick when I thought I would have a few days off. Then my little one ends up sick. I've had 9 people cancel class the past couple of days mostly from illness.

Since no one attended this afternoons sewing class and little one was at her grandmothers I had a chance to do more sewing. 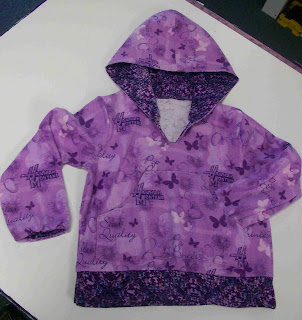 Little one cut out a Hannah Montana jacket maybe 4 months ago. I've been asking her if she wants to go to the sewing studio for a mom and daughter sewing date and she keeps putting me off. I thought I should sew up this jacket before it's too small for her.

I added the liner in the hood. I think it looks much better when it's hanging to see fabric instead of seams. I also used the same fabric on the bottom band and sleeve bands (I tucked the sleeve bands in for the pictures - a step I need to finish)

So, I'm sewing having a wonderful time streaming talk radio over the internet learning more about whats going on with the serge of the war and with the healthcare bill. I had a few steps to go when I realized what little one cut out will never fit her. And, sure enough when I picked her up she tried it on and she had a hard time putting it on.

No worries though. Her dance studio is collecting clothing and food to pass out during the holiday. They go around town on a Saturday to dance for the homeless and elderly hitting different charities each year. The girls just love doing it. They also have a family who's house got burnt down and could use some clothing. So, even though it won't fit little one it will fit someone special.

I told little one I would make her the largest size in the pattern so she can have it for a while. She wears a jacket in school everyday since they keep her school so cold. 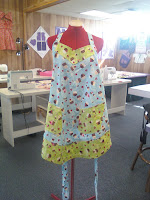 So as I'm uploading the pictures I noticed I had some pictures of students projects I never shared from a few weeks ago.

One is a cute little apron. Aprons are great to make as a first project. They only take a couple of hours to make.

The other picture hiding in my camera is a jacket with liner. 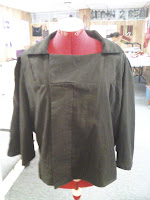 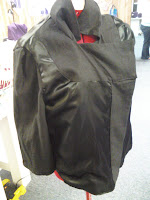 The pattern didn't require the liner but we did it anyway to make it look better. This student did a great job on her first project. The only thing she has left to do is buttonholes. Hopefully we can finish it when she comes to class tomorrow. She did a beautiful job. I am so proud of her.

Tomorrow I only have a few people coming to class (if they show up) :)

I do have other things to show you from the week but I'll save it for the week in review post.

It's been crazy hot here the past few day's. I'm so ready for the cold front to make it down here. You know it's hot when your windows fog up from the humidity on the outside and the AC on the inside. That's what my windows looked like most of the day.

As crazy as this week was I have to blame it on the full moon. And I have to say when we have full moons here it's a beautiful site.

Email ThisBlogThis!Share to TwitterShare to FacebookShare to Pinterest
Labels: my projects, students projects