This was the last full week before Thanksgiving. It really is hard for me to believe this year is almost over. Can we just slow down time a little bit? With the holiday next week I'll be taking 5 days off to spend with the family (oh who am I kidding - I'll be cleaning, laundry, yard work - the never ending things)

We had another fun week of sewing at L2S. Not only were the winners announced for the Project Runway contest which brought lots of smile. There were more smiles had while learning the art. I love when adults jump up and down while clapping when they start to see their project coming together. And the energy they have when they hold up their finish product is very exciting.

6 people learned how to use the sewing machine in the machine class. 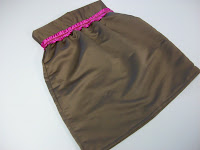 Randy from the Project Runway contest made another cute little skirt for her daughter. I really love watching Randy go through her creative process to see what she comes up with. And usually it's just beautiful. She has a great eye and good ideas for to turn old things in to new and using all kinds of things to embellish them. This was a quick project for her. She had it made in a couple of sewing classes. 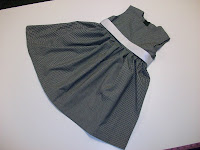 Ana started sewing with the machine class a few weeks ago. It took her 7 hours to sew this cute little dress for her granddaughter. I let people embrace what ever level they want to work on as far as perfection. There were a few seams on this dress that looked fine with me but not with Ana. She took her time and when she didn't make the straightest of lines she took them out and did them over again. She learned how to use two layers of fabric in the bodice to hide all her seams. She also learned how to install a zipper. She already had her next project, a top, at the end of her last class and started sewing a few seams on it. 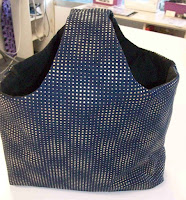 Nakima made for her first project, a hand bag, in 2 hours. It's a real easy pattern with only a few seams. It would have been nice if I wrote down the pattern number but hey - something else I have to work on like taking pictures during class.  I think this bag came out really cut and something she will be using for a long time. She already has a jacket picked out for her next project. She will be learning how to adjust her pattern to her size when she cut's out her jacket. I talked to her about doing a muslin first but it's her choice if she wants to sew it twice. I let the students decide - I'm hear to guide them. 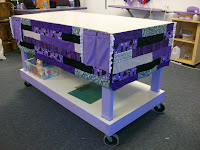 I had a chance to sew a seam here and there this week. I really didn't like the skirt I made around my work table a couple of months ago so I decided to do something different. I got the idea from this quilt. I just love how this quilt looks on the bed. And I don't sew quilts. They look too country for me. I'm not a country girl. :) This quilt doesn't look country. So I decided to use the same concept to sew a new table skirt. I have plans of making a curtain for my changing room the same way. And I might just make new machine covers like it too.

Since my singer serger has broken down on me so many times I've been looking for a replacment. I've had my eye out on some babylocks I've seen on craigslist. When I talked about it in class one of my students said her SIL had a brothers serger she was looking to get rid of for $100. The student decided to keep the machine after I showed her how it worked but she did say I can keep it at the sewing center until she's ready for it. I've never used a brother serger before. I think for the price it's not a bad machine. It's a lot better than the Singer at the same price.

Next week is a short week -  seats available if you want to attend.

I hope to hit the machines to sew a few things on my days off when I'm done with all the never ending things. But we still have a few more days until we stuff ourselves silly. Then we say "bring the bucket" (monty python if you know what I mean LOL Mr Creasol.)