It was a really fun week at Learn 2 Sew. 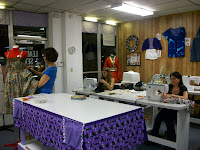 We started off the week with everyone finishing their Project Runway entries to be turned in on Thursday. Nothing like waiting until the last minute :)

It's amazing what was turned in for the contest. This was first sewing projects for most all of the entries. Some took a few hours to make while others took around 10 hours. The best part for me is seeing what the student wants to make and what fabric they decide to use. Sometimes I would never think of using fabric in a way the student wants to use it. There are many creative people who just need a little help with sewing technique. I get just excited as the student to see what they make for the first time. 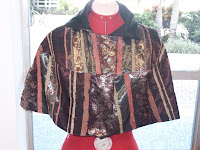 There are times when it could take 10 hours to sew something then there are times when you can sew a project in a few hours. I have one student who's been coming to class almost everyday. It took her a long time to sew her first project. She was able to cut out her second project out at home so we didn't have to take the time to do it in class. She sewed this little cape in a few hours. This a perfect garment to wear on a cool night for dinner on South Beach to keep you warm when you get that chill that the South Florida breeze brings.

Wednesday morning sewing class canceled because the kids are out of school.

On a parting note; I'm still trying to decide if I should stay at this location. I've had many students have a hard time finding a parking spot during the weekday classes. One had to drive around for 20 minutes this past week (I'm so sorry). And if you've been to class you know the problems I've had with the other tenants in the building. I was told they were given 30 days notice to leave by management, then come to find out they aren't leaving. I have been looking at new locations. Some of the locations have been empty for a couple of years. The landlords want too much money, still, with being empty that long. I'm praying for answers on what decision to make and for a good location to come my way that L2S can afford. I would love to be next door to JoAnn Fabrics (just putting that out there)......  wanted to keep you informed what's going on because many of you hear me complaining during class after I hear your comments. I have until the end of the year to decide.