Before I announce the winner I have to talk about Project Runway Season 6. This wasn't my favorite season. When you fall asleep watching the show you know there isn't much excitement. The judging was awful this year which is why I think it was a bad season. The only excitement was watching the final episode tonight. What amazing work the designers did this year. Now that my students know how to sew they know how much work goes into each seam. I loved all the designs but Carol Hannah's was the best IMO. I just loved watching her looks go down the runway. The pop of the first look was..just wow. But congratulations go to Irina. Not that I liked her look because fashion is all personal preference. Her lines were all the same..and there were a lot of them in every garment. There was much more detail in her work than the others which is why I think she won.
Click here if you want to place your vote who you thought the winner should have been.

Now on to the winner of L2S contest:

This contest didn't go quite the way I wanted - but when things don't go the way your want you "make them work". Since there was a problem with the poll I've decided to take that information (before it started going haywire) along with who I thought did the best job sewing their design.

He was in first place most of the time on the poll. This was his second sewing project. He took his time making sure he got every seam right.  Scott is a teen who inspires to be a designer. He's working on his portfolio for design school. Keep an eye out for this kids. He's going to make it far in fashion. Congratulations Scott - you receive 20 hours of sewing class. 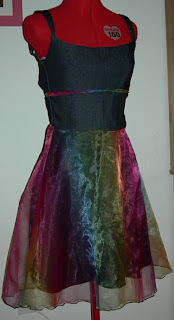 She was in second place most of the time during the poll. She is also a teen who started sewing a couple of years ago. There's not much I teach her these days. Her favorite thing to do is to just start cutting up fabric and sew it back together. She likes to use all her fabric. If there's left overs she'll find a way to use it. Congratulations Ariela - you receive 10 hours of sewing class.

All the other designers. That's right! You're all winners. I wanted to make this fair since there was problems with the poll. When this happened I decided to have a twist just like the TV show and give everyone: Patricia, Chae, Ceci, Anne, Randy, Sara, Kerry and Corina 5 hours of sewing class.  Congratulations!

I want to thank everyone who entered the contest and bringing me some advertisement. I hope some of your friends will join you in sewing class. As you know...it's "sew" much fun and very rewarding.

Just let me know when you want to come to class to use your hours. I'm so very proud of all of you! You're all like my children who I see growing and leaning with each class. It's very exciting and rewarding for me.

There's going to be another season of Project Runway starting in January. I'll be holding another contest then so start thinking about what you would like to do, come to class and sew it up for your next entry.


Read more about the contest here.

Until next time,
Enjoy your moments ~ make them "sew" much fun,
Cindy