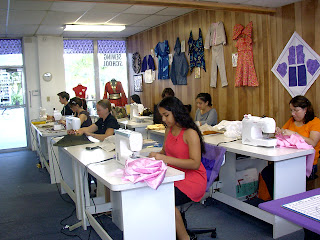 Lots of smiling faces attended sewing class this week. Some classes were full, some not so much.

5 people came to the sewing machine class to learn how to use the machine.
No one enrolled to the cutting class.
12 people attended the sewing classes learning to making mostly dresses, a couple handbags, button down blouse, pj's, skirt and alterations .

Some of the students attended a couple of classes this week. Others wanted to attend but life got in the way and they had to reschedule to another time.

One of my students thanked me after the machine class because her and a friend attended another sewing class to learn to use there sewing machines. She asked a question in the other class how to keep the thread from coming out because she was being taught to sew going forward only. She was so happy with the knowledge of hitting the reverse to lock in the stitch. She couldn't believe the last sewing class didn't teach her this. I was a little amazed by that statement because this sewing 101 knowledge a sewing teacher should know.

Another male student started his sewing experience this week by attending the machine class. He will be back next week to cut and start sewing his project. I love teaching male students. They are very passionate about sewing. Heck, they have to be to sit in a sewing class with a bunch of chatty women. Most of them want to be designers. It's so rewarding for me to give them my knowledge because I know they will be using what I'm teaching the rest of their lives and hopefully have a very successful future with the knowledge given. My other male student, Scott, started on a new project. It's a school project. He's making a base skirt that he will be adding live plants to later when the project is due. I gave him the idea to use a paper bag to decide how he wanted to place the greenery and flowers before hand so he's not deciding the night before it's due to be handed in. He was very thankful for the idea. 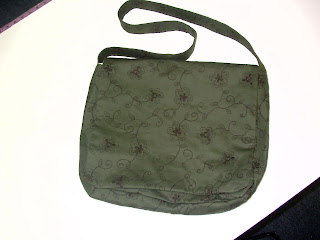 I have another student Amy who wanted to start out simple by sewing a handbag. She was a little slow starting off but built her confidence as her project progressed. This is why I let people make what they want. Some people want to start off with an easy project while other will take it to a more advanced level. Most people know themselves and their frustration level on what kind of level they want to start. Amy made a beautiful bag her first time that she will be using a lot. When she was done her smile was fill with pride which is a great feeling and why so many of us sew. 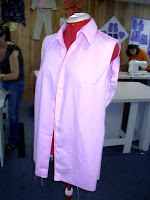 I have 4 Patricia's attending class (I've had to learn last names LOL) One of them has been working on this button down shirt. She's doing a beautiful job perfecting this project. The seam ripper has been pulled out a lot during this project. But remember, the seam ripper is our friend. A button down blouse isn't the easiest thing to make but this student wanted to take her learning to another level. She's learned how to install a collar, how to add facing to the armsholes instead of installing sleeves. She's also will learn how to do buttonholes with this project which hopefully we can get to next week.

Most of the time I try to tell people to let me teach them technique in class - to try to work on their perfection at home. Some people can't because they don't own sewing machines and can only sew in class. I will let these people take their time with their prefection but they don't learn as much as others in class. Again, I let people stay in their comfort level because I want many smiles while learning the art. I want happy sewing people everywhere because sewing brings me so much joy I want to pass that feeling on to others. 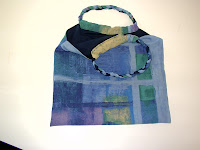 Since I had a night with no enrollment I worked on another ready to sew project. These are projects that are already cut which include a pattern and instructions on sewing if you want to make it again. I try to keep the projects simple that can be made in a couple of hours to teach one or two concepts/techniques in sewing. This time I made an easy handbag. If you're interested in making it in class it's only $7. It will be added to the website soon. Hopefully I can add more projects like this in the near future.

Well, that's what happened at L2S this week. Classes are filling quickly for next week so if you want to attend give me a shout to reserve your seat.

Until next time,
Enjoy your moments ~ make them "sew" much fun,
Cindy
at 8:14 AM