Finally we got some cold weather here in South Florida. It's been wicked hot the past few weeks. You would think it was August with all the humidity. I know people in the north are getting snow but I'm so thankful to cool off if it only last a couple of days.

I had a lot of smiling faces attending sewing class this week. I love seeing what sewing brings out in people. When they start understanding what's being taught they have a glow about them. They jump up and down with big old smiles. And some I know will be having happy dreams about what they will be sewing.

10 people attended the machine class.
3 people came to cutting class to cut what else a dress, pants and a handbag.
8 people attended sewing class making a blouse, tutu for a little one, 2 dresses, apron, top, alterations.

There was one full machine class this week. Usually I have at least one person bring in their own machine to learn on. All my machines were used in this class. I think if you don't know anything about sewing machines it's better to take a class first before you buy one. Depending on what kind of sewing you want to do will determine how much money you spend on a machine. I know a lot of new sewing machines are being bought because a lot of new machines were being taken out of the boxes the past couple of weeks.

Slap my hand, I was really bad about taking pictures. There were a couple of finished products completed. I guess my mind was other places if you read my last post. I was focused on teaching while class was going on and the camera never saw the light of day. I really need to make a sign "remind me to take a picture of your project". But since there were more attending the machine classes then sewing projects there wasn't much to take pictures of. 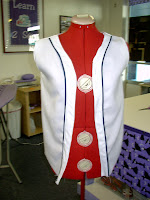 My sewing this week involved making a twilight Halloween costume. I only had one person in the 3-5 sewing class yesterday so while she was making her alterations to her pants I decided to work on the costume. A little mistake was made LOL umm.. I kind of left out one "I". I should never do things like this when I can't give it my full attention. I guess I'll be making a new back. At least I didn't sew down the armhole facings. And after looking at the picture I think I'm going to make the numbers bigger. I know there was a reason why I bought extra fabric. I'm 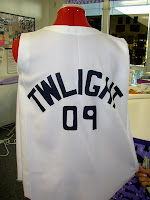 adding this to the back of the baseball uniform so people know what she is for Halloween. She always wants to be things that people would never figure out. Halloween's in a couple of weeks so I have time to fix this mistake. And don't forget we turn our clocks on Halloween this year.

Everyday when I pick my kids up from school I ask them two questions. Tell me something you learned which usually I get the answer of "stuff". The other question I ask is tell me something good that happened because I want them to focus on the good things in life. I try to focus on the good things but I was a little bummed out this week when my little man had his first band concert and I couldn't attend because I had a full machine class. If there was anything I could change about the week it would be to have a free night to see him play in public for the first time. He said he was really nervous but when he walked out on stage all the butterfly's just flew away. When I walked in the door that night he had a really big smile. But really, why is it when something big like this happens the video camera never works? I charged it - gave it to my husband so I can see him play and there was no memory card in the camera which means no video was taken. If I only had one person in the class I would have so been there...but... such is life. Accept it and move on.

And then you find out the daddy took a video with his cell phone. Who knew :) It's not that great because it was taken with the cell phone. The kids are wonderful - they've only been playing a few weeks. I have a trumpet kid sitting in the back.
Olsen Middle School 6th Grade Band First Concert
Next Week Sewing Schedule
Machine Class Tuesday 6-8pm *3 seats available
Sewing Class Wednesday 11am-1pm and 6-8pm *the night class is filling quickly
Sewing Class Thursday 9-11am *early release from public school so I'm having class early
Zipper/Buttonhole Demp Thursday 6-8pm
Machine Class Friday 11am-1pm *no public school if kids want to attend
Cutting Class Saturday 10am-12noon *seats available for those who just took the machine class
Sewing Class Saturday 1-5pm *early session is filling - more room in the 3-5 class.

We have to do the things that brings us the most smiles so we can enjoy our moments. It's all about our moments and what we do with them.... So with that.....

Until next time
Enjoy your moments ~ make them "sew" much fun,
Cindy
at 6:28 AM