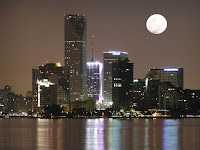 Another sewing week has ended at Learn 2 Sew. Seeing that we had a full moon this week it ended up being a very strange week at the sewing center. The moon was beautiful to look at but it did bring out the unexpected.

No really, did the week just fly by or what? I scheduled several classes this week with very low attendance.
0 People attended the machine class.
2 people attended cutting class to learn to cut a mans top and an apron.
8 people attended sewing class doing alterations, sewing dresses, blouse and a pair of shorts.

Since no one finished any sewing projects this week no pictures were taken so you get this beautiful picture of the moon over Miami. No pictures were taken because it was a very slow week at the sewing center. Life seemed to get into the way of many people's intentions of attending class. Many people canceled or didn't show up all together. It was the full moon :) right?

So, I worked on a few ready to sew projects and making patterns for new projects. I had a few things to alter myself (how come boys are always ripping out the seams in their paints?) I also pulled out some UFO's I need to finish up. So much sewing - so little time.

Hopefully I can post again before Thursday. I've used all my time on my internet card with version. They allow 5G per month which will reset on Thursday. Since I got rid of the internet at home (trying to save money any way we can) the family has helped me use all my time on my wireless card. They want a lot of $ if you go over. I'm already over by $20 so unless I can jump on a free internet access like I'm doing now it will be a few days before you get sewing over the wire. So much for trying to save money ... LOL sometimes things just don't go they way you thought they would.

So, since it was a very strange week this is going to be a short week in review with no pictures to share.

I hope to see you in class soon. If not I hope you're sewing at home! I know it's your passion because I see you glowing when you're sewing..so get busy doing what makes you glow.

Until next time.
Enjoy your moments ~ make them "sew" much fun,
Cindy
at 5:27 PM