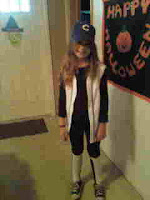 This year I got off easy making Halloween Costumes. My daughter started reading twilight when she was 8 years old so this year she wanted to be one of the character from the movie...the baseball scene. This was an easy costume to make. We bought the cap, she wore her long black pants with a long sleeved shirt and her converse shoes. The only thing I made

was the vest and painted stripes down her white socks. She's still in elementary school so she got to dress up for school.

My son wanted to be "ghostbusters". It was less money for me to buy his costume at party city instead of buying the fabric and spending the time to make a jump suite. Since I didn't make his costume I don't have a picture of it. But I did make him something....... 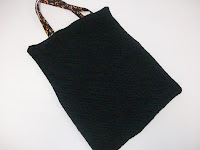 Because he's getting older I thought he deserved a grown up trick-or-treat bag. One that he could collect tons of candy in...because hey, Halloweens all about how much candy you can get :)

How I made the bag: I'm always asking for donations. You never know what you receive if you just ask for it. I had a student who worked for a designer. You know how they say there's no mistakes in sewing because you can use your ripper to have a do over but there are mistakes in cutting that cost you money. Well this 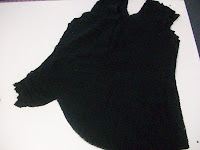 designer made a mistake cutting out layers and layers of fabric (that's how they cut things when they mass-produce, in layers-its really fun to watch the process). My student brought in 3 big bags of "oops" cutting fabric from this designer. I used a few layers of this to make the trick-or-treat bag and just used some left over Halloween fabric from years past for the handles.
I am recycle queen :) You can always turn something old into something new. Now lets see how many trips he makes home after filling the bag. Last year it was 3 times his bag was so small.

Sharing time: Do you want to have some Halloween Fun? My kids wanted to find some ghost stories. We did a search about ghost in the White House. We came across a lot of fun reading

The White House has a reputation for being one of the most haunted homes in America. President Harry Truman said the place was haunted "sure as shooting." Kennedy’s Press Secretary James Haggerty admitted to sensing the presence of Lincoln’s ghost in the White House, and Clinton’s Press Secretary Mike McCurry admitted he was a believer: "There are, from time to time, reports that the White House is haunted by mysterious appearances of figures from history, and I believe them. There have been serious people who have serious tales to tell about these encounters, and there are many people who seriously believe that there is a haunting quality to the White House."

Hillary Rodham Clinton said: "There is something about the house at night that you just feel like you are summoning up the spirits of all the people who have lived there and worked there and walked through the halls there." On the “Rosie O'Donnell Show,” the former first lady noted: "It's neat. It can be a little creepy. You know, they think there's a ghost there. It is a big old house, and when the lights are out it is dark and quiet and any movement at all catches your attention."

My son read me this whole article from his cell phone last weekend while I cleaned the bathrooms LOL. I was entertained while cleaning and loving it! Anything to get him to read more. He's not like his sister, she likes reading.

If you would like to see what I've made in the years past click here, and here.

I hope everyone has a fun and safe Halloween.....

Until next time,
Enjoy your moments ~ make them "sew" much fun,
Cindy
at 3:26 PM

Email ThisBlogThis!Share to TwitterShare to FacebookShare to Pinterest
Labels: Holidays, my projects, Sharing