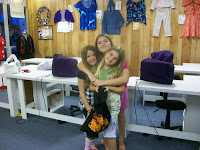 It was a slow week at the sewing center.

Monday we started the week with a kids class. I'm running kids classes on the second and fourth Monday of each month. I don't run a lot of kids classes because I don't get many enrolled from kids. I get plenty of phone calls about the kids and sewing but not many people enroll. I think it's because of the economy. There's not a lot of extra money for the kids.

The only one who did enroll was my daughters friend and our neighbor. I had promised these friends they would have a sewing date over the summer. The day we planned to have our date my daughter got sick and we had to cancel. So, we got to have our sewing date Monday evening. 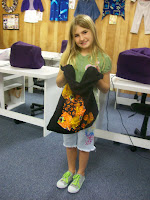 It was the first time sewing for one of the girls. I threw out my scraps and let them have at it. She sewed together some squares and put them on some black fabric to make a trick or treat candy bag. Lot's of smiles were had while making this. I love watching the smiles that sewing brings a new student. She had a big old smile! They all told me how much fun it is to hang out and sew with friend, listening to music. They want to do it all the time. They caught the sewing bug... I LOVE IT!

3 people learned how to use the sewing machine in the machine class.
1 person attended the cutting class and learn how to cut out a dress.
7 people attended the sewing class making a head scarf, a wedding dress (this is almost done. I'll be showing pictures soon), button down blouse, pj's, tote bag, and a few alterations.

Besides taking a couple of pictures of friends during the kids class - the rest of the week I was really bad at taking pictures. The red dress was almost finished from last week but a little more practice is needed before he tries to do the blind hem stitch on this dress. I'll take pictures of this on Wednesday when he returns. This project is getting photographed for the year book at his school. It's coming out beautiful!

I did get to sew some this week. After making brown pants for myself my daughter decided she wanted some too. I'm real close to finishing them. I also got to do some extra things around the sewing center pulling things together that had been pushed aside until I had time. I love having my sewing center all nice in neat with every thing in it's place so when I'm teaching I have everything easy at hand.

Until next time,
Enjoy your moments ~ make them "sew" much fun,
Cindy
at 8:34 AM