We had a few more people attend sewing class last week. Some of my students I have seen in a few weeks have returned.

5 people learned how to use a sewing machine in the machine class.
3 people came to cutting class learning how to cut out a handbag, and two dresses (we make a lot of dresses in class)
13 people attended sewing class making rag dolls to give as Christmas presents, 6 dresses, toddler mattress cover, pillow, roman shade and 2 pajama tops. 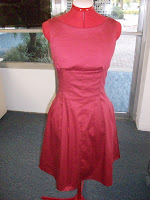 The red dress was finished last week. Scott (16 yrs old) made it with no top stitching. He handed sewed the bodice liner at the waistline learning 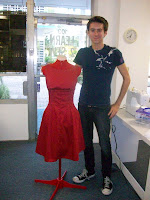 how to hand sew for the first time. He also learned how to do a blindhem which he accomplished beautifully.

Since Michelle Obama is bringing back big broaches we talked about going through his mothers old jewelry to see what she had so he could add something for to the dress when it get's photographed for the year book at school. This is his second sewing project. This kid is smart and learns quickly. He wants to be a designer when he gets older. I think he's well on his way to a successful future. 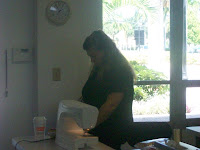 daughter for a while. She's made several projects before she picked up the dress again. It's a pretty purple bubble dress with flower lace trim. It came out beautiful and I did take a picture of it when it was complete but the picture is no where to be found. One of those things that make me go huh? I know I took it because right after I took it I snapped a picture of Laurie cleaning up after class. It's too funny because you can tell in her face she isn't happy about leaving class and said something right after I took this picture. And FYI if you need any embroidery Laurie has her own business and does beautiful work.

I have a few students who have been attending sewing classes for over a year. One of my students, Zulie, brings her little girl with her. She is the only child I will allow to attend the class with their mother. When she first started coming with her mother she stayed right by her side and wouldn't say a word. She's getting a little more comfortable now. Yesterday while she attend with mom I got her hand sewing. I think she caught the sewing bug - what do you think? Check out this smile. She's only 5 years old. 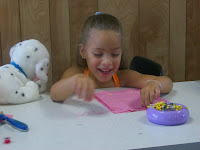 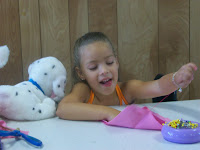 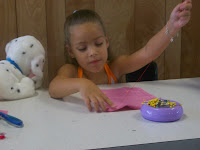 Many people have already reserved their seats for next week classes. There will be a lot more to tell and hopefully a few pictures to share. I only take pictures of finished projects.

Until next time,
Enjoy your moments, make them "sew" much fun,
Cindy