I've learned my lesson sewing for my daughter. I no longer sew things for her without her knowledge. When I don't ask her too often she hands it back to me and say's " I don't like this much Mommy, you can hang this in your shop". She has her own style and sometime I can't figure it out.

So now I let her pick out her own pattern and fabric. Some things she sews if it's easy enough. She has a Hannah Montana jacket cut out ready to be sewn when she has time. It doesn't get cold here until maybe December so she has time.

Last night I finished some brown pants she picked out. She liked the fabric I used for my brown pants. She also went through my button stash to pick out buttons. I had to take the pants in on the first fitting because she's getting taller but has the same small 23" belly and hips. 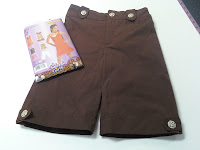 She wore them to school today along with her pink convers. What's up with convers and kids nowadays? They want every color. She has black, red and pick. She's asking for green next. 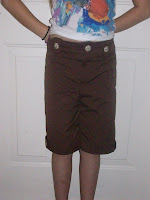 The pattern is 2914 by Simplicity if you want to make it - it's very easy. The only reason why I made it instead of little one was because I didn't think she could get the tabs all looking the same - and she's afraid of sewing zippers. After you do those two things there isn't much to sew to finish. She's learning in baby steps but I am so proud of her sewing skills. 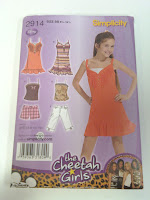 If I had to make this again I would use my own placement for the tabs. I used theirs and they came out way off on one side of the zipper. I didn't realize it until I sewed the buttons on. Because she always wears her shirts on the outside I didn't worry about pulling it apart and doing it again.

I also cut out a blouse she can wear to school. The one in this pattern will not do for school. That's my next project.

I have a class starting soon. More sewing ...Yippeee!

Until next time,
Enjoy your moments ~ make them "sew" much fun,
Cindy
at 8:46 AM

Email ThisBlogThis!Share to TwitterShare to FacebookShare to Pinterest
Labels: my projects