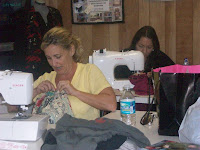 Last week was a different kind of week with the kids going back to school. Miami Dade and Broward county both started on the same day. My kids are now attending two different schools which start and end at different times. It takes me an extra hour to get both off to school and the pick up... let me just say I'm burning a lot of gas in the pickup line (and you know me, I hate helping the oil companies make any profit). An extra hour and half to pick up in the afternoon. So it looks like somethings going to get pushed off my plate (let's hope its not the exercise routine I started) since there is only so much time in the day. Either that or I really have to have great time management and move a little faster.

What happened at sewing class this week? Lots of great things. We had the same group of people attend Monday and Wednesday class. We had a lot of fun sewing a couple of dresses, a really lightweight knit blouse and a blanket made out of t-shirts. In the cutting class we cut out a dress, handbag, pants, toddler dress and a cute little skirt. Saturday the students worked on sewing a jacket, handbag, that cute little skirt and the toddler dress. One of my students brought in her new baby lock serger. You know how much I love playing with new machines! I need a new serger. Mine broke last week and I'm just tired of fixing it. I'm looking for a used one on craigslist. or ebay.

Since a lot of people don't like their names online - I withhold all names :) But pictures we can do.... 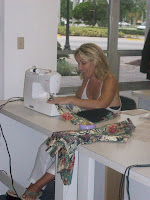 I've had 3 people bring in the same dress pattern to make in the past month. No one has used the same fabric (that's only happened one time. two different people bringing in the same pattern and fabric) I really need to write down pattern numbers. Heck, I'm not even sure what company it's from. I'll find out when she comes back from Paris next week. She made the dress to take with her. I loved the print she used. She wasn't finished installing the zipper before class ended Wednesday. I hope she was able to finish it herself before her trip. 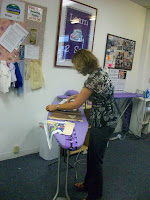 One of my students who started school this week herself because she's a teacher runs a lot. Or shall I say she runs in a lot of marathons and has tons of t-shirts. For her first project she decided to make a blanket. She knew what she wanted to do because she had a book. We just had to follow their cutting directions (because this is the hardest thing about making blankets, making sure 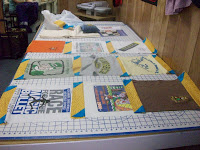 everything is cut right). She's done very well putting everything together. One thing about sewing quilts is you make a lot of the same seams. So once she got her rhythm down the blanket was put together. The only thing needed now is the batting and backing with the edge binding. A few more things to teach in this project. 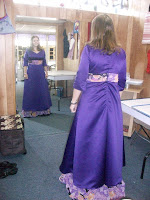 Last but not least is the wedding dress. Her BIL is getting married. She was allowed to get any dress she wanted as long as it was blue or purple. She thought about getting the dress made then had another thought of using the money to take sewing lessons to learn herself. She's only going to wear this dress one time. It's a big project to do for a first time learning but I have to tell you how proud I am of this student. She is calm cool and has no problems with the instructions given to her. She understands not to have high expectations and has brought her perfection level down a notch. There's a few things we have to work out like the zipper pulling in the 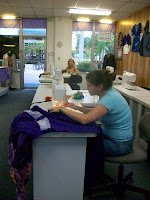 back from the liner and the length needs to come up a bit. But the dress is coming out beautiful. She is coming in Monday to finish it. And we have to be done because she's leaving on Wednesday to go to the wedding. This will also be entered in the project runway contest.

Speaking about Project Runway...whatcha think? I am just loving having it back on again. The feel of the show is the same. I think the people they kicked off the first two weeks should have gone and next week we all know who's going. If you sew at all you can tell who has it and who doesn't. And let me just say Mitchell just doesn't have it when it comes to sewing. He might know a few things and would be ok sewing at home but he shouldn't be on Project Runway. I loved who won this week. How cute was her dress? When your that pregnant you want to feel special. I would feel so special in the winning dress and jacket. Now that's a winner!

One last thing I've decided this week. We have suffered through a very hot summer and the place I moved to in December does not have the a/c to keep up with the heat. I'm tired of sweating while I teach you to sew. I know some students don't feel the heat and a few that are just like I - sweating. For this reason I'll be looking for a new location when my lease expires. I just wanted to start giving people the heads up I'll be moving again in the next few months. I just don't want to go through another summer like the last. I'm too old :) And really I pay good money to rent the space and should have to be hot all the time.

Until next time,
Enjoy your moments ~ make them "sew" much fun,
Cindy
at 7:49 AM