This post is for someone who is starting out in their sewing adventure. Sometimes what comes second nature to someone who sews can be difficult to learn for a beginner. This post is to warn you about the dangers of sewing. And yes, you can get hurt sewing if you're not careful.

Because you can get hurt with the hot iron, sharp needles, pins and scissors I make everyone who attends my class sign a waiver. I've only had 2 people get hurt while in class. One girl put the sewing machine needle through her index finger. And I had a camper burn herself on the iron last year.

So, let's go over a few dangers in the sewing room.

First, because we do press everything we sew with an iron you have to make sure you don't touch the iron with your fingers (ouch!) We also use steam to help hold our seams. The hot water coming out of the iron can also give you a really bad burn too. Pay attention to what you're doing while you are using your iron.

When you're working at the machine sewing your seams do not put your finger close to the needle going up and down in the machine. Keep your fingers at least 2 inches away from your needle and pressure foot. When I talk in class about the needle going through your finger many people tell stories about this happening to them. The one girl who this happened to in class said to me vary calmly "I just put the needle through my finger". I had to slide her finger off the needle and send her to the hospital. The funny part of the story was she drove 45 min. to take my class. When she walked in the door she saw he best friend sitting in the class. She said to her friend "you didn't tell me you were taking a sewing class" her friend said it back to her. They both drove 45 minutes on the same day and didn't tell one another what they were doing. I told them later things happen for a reason. She needed her friend there to take her to the hospital. Moral of the story, don't put your finger close to the machine needle.

And you would never think about it but the pins we use to hold the fabric together while we sew can be very dangerous too. One of my pet peeves with sewing is to watch where you put your pins while sewing. Don't get in the habit of throwing pins on the table when you pull them out. I promise you they will end up on the floor. When you're home sewing you don't wear shoes, The pins on the floor will end up in your foot. When I've talked about this in class I've had several people tell me this has happened to them. I've even had one student tell me she had to have 5 surgeries to get the pin out of her foot because every time she stepped down the pin broke off in different pieces. When you're done using your pins make sure you put them in a pin cousin. If you have a great desire to throw them on the table buy a magnetic pin catcher to throw them in.

Since we're talking about pins another thing that could happen is if you sew over pins the needle can break, the pins can bend and jam in your machine. I sew over pins all the time. I don't have fear of a needle breaking and flying up to hit my eye. I have heard stories of people getting the needle in their eyes and they wear goggles while sewing. To me that's taking your fear level just a bit too far. Just so you know if you sew over your pins they can break your needle. When your needle breaks sometimes it goes flying and you don't know where it's going to fly to...

So, for all you seasoned sewers that read this blog if you would like to leave your safety tips or tell a story about your sewing injuries to warn others in the comments below I know the new people starting would appreciate it.

A couple of parting pictures from class this morning. I have a machine class in a couple of hours..... 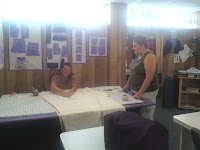 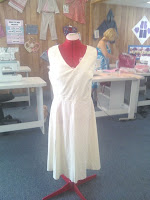 Until next time,
Enjoy your moments ~ make them "sew" much fun,
Cindy
at 4:13 PM

Email ThisBlogThis!Share to TwitterShare to FacebookShare to Pinterest
Labels: tutorial