'Project Runway' back on air Aug. 20 on Lifetime
The San Francisco Examiner Wed, 22 Apr 2009 09:48 AM PDT
"Project Runway" finally has a date to reunite with fans after sewing up its legal battle: The show's sixth season will start Aug. 20. Lifetime, the new cable TV home for the designer-competition series, announced the season premiere along with a new companion series, "Models of the Runway."

So we have a few more months to wait but at least we know it's going to air. They'll have the next season ready for us before we finish watching this one. It's been a long time....

Next up - Earth day Extravaganza. My daughter had a school project. A recycle fashion show. Make anything you want only using recycled items. She made a Cocoa Krispies box skirt.

We cut up 2 inch strips of 4 boxes. Little one loves Cocoa Krispies so it didn't take us long to collect the boxes. we cut the top end of the corners off to make the waistline. She used tape to put it all together and to hold it together while she wore it. She added a white fringe on the bottom.

She also took in blue jeans recycled into a bag and a pencil holder made out of the pant legs. These were items we already had and one's I have my sewing camp kids sew if they choose. 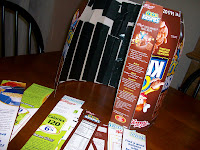 The whole 3rd grade had a fashion show. All the students had to write what the announcer was to say about their recycled item.

We really treat everyday as Earth Day. It's kind of crazy we only have one day a year to "celebrate" taking care of the place which we live.

After spring break my classes are starting to get busy again. I had a few people attend the zipper demo last night. I showed how to install a zipper in a pillow, how to sew an invisible and a fly zipper and a few other way's to sew a zipper. I'm going to run this demonstration again the first week of June. I hope you can make it....

Until next time,
Enjoy your moments ~ make them "sew" much fun,
Cindy
at 7:33 AM