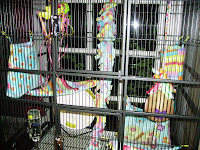 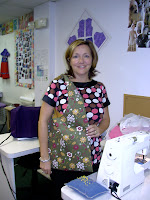 One of my students, Maureen, started sewing to learn how to make different cage themes for her sugar glider cages. Her very first project was a handbag which she had no problems sewing and moved quickly to making her cage covers and all accessories for her cages.


I wasn't sure what a sugar glider was until she educated me.

The Sugar Glider is around 16 to 21 cm (6.3 to 7.5 inches) in length, with a tail almost as long as the body and almost as thick as a human thumb, and weighs between 90 and 150 grams (3 to 5.3 oz). The fur is generally pearl Grey, with black and cream patches on the underbelly and black or grey ears. Other color variations include leucistic and albino recessive traits. The tail tapers only moderately and the last quarter of it is black, often with a dark tip. The muzzle is short and rounded. Northern forms tend to be brown colored rather than grey and, as predicted by Bergmann's Rule, smaller.

Sugar Glider on a table

Where legal, the Sugar Glider is not difficult to breed in captivity under the right conditions, and small numbers have been legally and illegally exported to the United States and Britain[5] where they have formed a breeding population for sale as pets. The Sugar Glider is a popular pet because of its lively and inquisitive nature; with plenty of attention, it bonds well to human companions.

Maureen breeds sugar gliders if you are interested in owning one. She also can make you some really cute accessories for your cage. Let me know if you need to be put in touch with Maureen to own one of these cute little things. She also holds a meetup group and can be reached through their website. 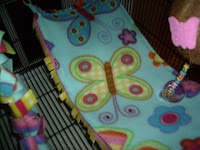 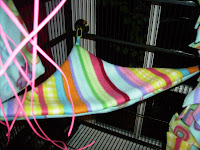 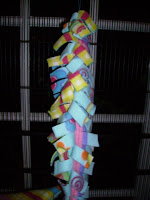 I'm working on Halloween Costumes. Sewn a few pairs of shorts for my daughter, made a few laptop bags I will be selling on my website and made a few Halloween candy tote bags.

I'm also very busy finding a new location for my business. There are many vacancies in Hollywood. I have my eye on a few and hopefully will be signing a lease with one of them soon.

Until next time,
Enjoy your moments ~ make them "sew" much fun,
Cindy
at 2:45 PM